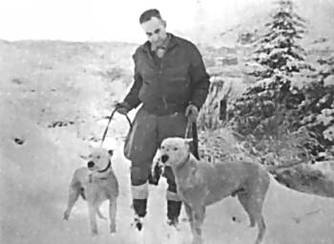 This breed has its origin in the province of Cordoba, in the central (Mediterranean) region of the Republic of Argentina. Its creator was Dr. Antonio Nores Martinez, a (renowned) doctor and member of a traditional local family. In 1928, his passion for dogs, perhaps a family legacy, led him to set the bases and a standard for a new dog breed which he named: Dogo Argentino. His work was based upon the methodical crossbreeding of several pure breeds with the old fighting dog from Cordoba, a dog which was very strong and vigorous but lacked psychic and genetic stability. This local breed had been the product of the crossbreeding among Mastiffs, Bulldogs and Bull Terriers and was widely known and appreciated by fervent dog-fight fans, a very popular activity at the time which embraced all social classes. 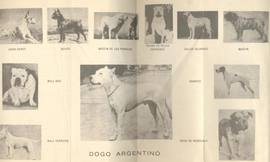 After a thorough and minute character study and selection, through different generations, Dr. Nores Martinez accomplished his purpose, obtaining the first family.
At the beginning it was generally considered a dog for fighting but Dr. Nores Martinez's liking for hunting led him to take the dog to one of his habitual hunting trips, where the new breed demonstrated its skills, thus becoming a key figure in all his trips. Thus it became quickly an excellent big-game hunting dog. With the passing of time, this adaptating capacity has made this dog very versatile as regards functions; it has proved to be a noble companion and a loyal and insurmountable protector of those it loves. Its strength, tenacity, sharp sense of smell and bravery make it the best dog among those used for hunting wild boars, peccaries, pumas and other country predators which can be found in the vast and heterogeneous areas of the Argentinean territory. Its harmony, balance and its excellent athletic muscles are ideal characteristics for enduring long trips in any weather conditions and then fighting fiercely with the pursued prey.

On May 21st 1964, this breed was acknowledged by the Federación Cinológica Argentina and by the Argentinean Rural Society, which opened their studbook to initiate registry.

It was not until July 31st 1973 that the breed was accepted by the Fédération Cynologique Internationale as the first and only Argentinean breed, thanks to the great passion, work and effort of Dr. Augustin Nores Martinez, its creator's brother and successor.
Copyright © 2012-2013, by La Blanca Kennel. All Rights Reserved.
Website Theme Design by Weebly.com